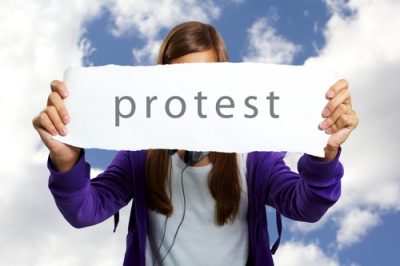 The incident that brought the community together was another tragedy that happened two weeks ago with a 2-year-old boy.

The little child was killed by a car on the sidewalk. Tragically, the little boy named Collin McGrath was in a stroller when a van jumped the curb after crashing into a small car.

‘’We should be able to leave our houses without the fear of getting hit by a car’’, the leader of the march, Kati Donovan said. Kati was hit by a car and she is still in the wheelchair. She has compassion for what’s happening in the streets because she has been through it herself.

People came from every corner of South for the gathering to protest against dangerous situation created by drivers for residents.

Kati Donovan led a slow-down march up to L Street, just past the corner of East 5th where little McGrath lost his life.

The city has since installed flex poles at several intersections for more visibility. But residents demand a master traffic improvements for all of the Southie.

Among protestors, there were people whose family members were killed in the streets. Deidre Habershaw said he remembers the promises given by the city officials to improve street safety, but yet, practically nothing happened.

His dad was killed more than five years ago.

In response to the demands of the protestors, Boston Police Commissioner William Gross said that they have to address the issue, and they are willing to do so.

Residents are very going to watch the response from community leaders carefully. The continued inaction would impact how they would vote in November.

With Used Car Prices Soaring, What Can Consumers Do?

An MIT Dropout Might Have Created the Next Big Device