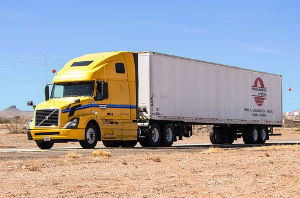 It’s true. Truck drivers are largely responsible for delivering all the things you see around you on a daily basis. All the inanimate objects in your life at one time probably traveled on a truck. After all, truck drivers deliver education materials to schools, food to grocery stores, clothes to retail stores and on and on. Basically, trucks are the major link between people and businesses throughout the country.

“The value of trucking in our economy cannot be overstated,” said John McKenna, vice president of operations at the trucking company BSP Transportation, Inc. “Without truck drivers, manufacturers wouldn’t get parts, builders wouldn’t get materials and hospitals wouldn’t get medical supplies.”

McKenna is one of the voices in the trucking world who are predicting there’ll be a huge shortage of drivers down the road. This refrain has been echoed by many leading industry experts. They imagine a world where the lack of drivers could bring the economy to an abrupt halt.

Interestingly, a new chorus is starting to sound about this issue, and it comes from labor economists. These experts are saying it’s not going to happen, they’ll be no shortage.

“As a whole, the market for truck drivers appears to work as well as any other blue collar labor market,” according to some data published in the Monthly Labor Review of the U.S. Bureau of Labor Statistics in March.

Despite the difference of opinion on this matter, both sides of the argument agree the demand for truckers is increasing. Currently, the industry is trying to figure out what its human-based workforce is going to look like, titans of the tech industry, including Uber, Tesla, Volvo and even General Motors are racing toward the creation of autonomous trucks.

In fact, just last year, Steve Viscelli, a sociologist at the University of Pennsylvania, predicted automation could replace around 249,000 jobs. That’s definitely no small amount. Also, the driverless trucks would replace the best long-distance driving jobs. Essentially, that would leave low-paying gigs for truckers.

The reason autonomous trucks are better suited for long-distance driving is because it involves less intricate city driving.

Despite industry experts saying there’s a shortage of drivers, or bound to be, this new group is saying drivers will enter the trucking industry at the same rate as ever as long as the pay is good. They are basically calling truck leaders alarmists. Nevertheless, both agree the demand for drivers is increasing because of the Amazon effect in society.

For McKenna, however, the most important factor in all of this discussion about driver shortage, is making a point to convince young people that truck driving is a worthwhile career.

What do you all think? Is this driver shortage talk a lot of nonsense?

The Mercedes-Benz Maybach is an EV Concept Luxury Car