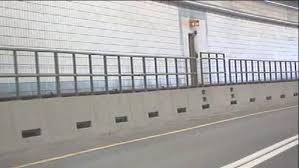 The “Ginsu Guardrail” made every Bostonian feel like they were driving in an 80’s post-apocalyptic movie. Ever watch escape from New York or Mad Max? Yeah, everything was spiked, and The Big Dig was is no exception. The Big Dig was the most expensive highway project in the US outside of the development of the highway structure post WW2.

What made the “Ginsu Guardrail” So Dangerous?

Most cities have utilized more effective and safer methods to stop motor vehicles from smashing into one another. Unfortunately, Boston never got that memo. The issue with the rails was that they were square-lipped. If you were a motorcyclist and you got bumped from behind, there was a significantly large chance that you would end up in the guard rail at anywhere between 45-70 mph. Now, that on its own spells certain death, but there was an extra factor that made things a little more gruesome: Square Lipped rails.

The nickname comes from the old “Ginsu” knives that were sold during the ’70s-’80s in the US. They were the “sharpest most affordable knives on the market”. Often shown cutting through everything from soup cans to metal pipes. Do you know the scissors that can cut a penny? Yeah, thank those guys. The nickname is a staple of Boston highways due to the safety issue for drivers. If a driver, more specifically, a motorcyclist were to somehow hit one, they would slide down the rail until they hit the square-lipped post and would have the unfortunate issue of being torn up.

As of now, there have been 8 deaths related to the sharp posts. Each one is as gruesome and devastating than the last. Many Bostonians have petitioned for an increase in the safety standards of the rails citing they do more harm than good. While the city is still underway with repairs for the Big Dig, this has been a focal point for many. With other deaths regarding improper safety protocols, these rails have been a big focal point for many residents who don’t feel like they are driving on safe roads.