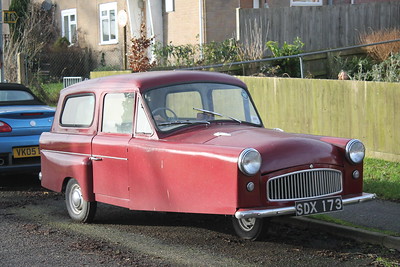 The Reliant Robin was one of the worst cars ever built. The concept was easy. Take a motorcycle and make it as much like a car as possible…without being a real car. This was disastrous.

The idea was to create a vehicle that could be road worthy, but not require a drivers license. For the coal miners up in the North, this meant they could get to work without braving the harsh elements of snow and rain.

For the miners at the time, having a drivers license was a luxury. Having a vehicle that could get them to where they needed to go meant easier living. The North was a huge hit with the Robin.

One key feature that made the car popular was how light weight it was. In snowstorms, a standard car would get stuck, but the Reliant Robin wasn’t an ordinary car. Its light weight meant it could easily maneuver through heavy snow.

And that was it.

Now that we have covered the benefits, lets take a look at why this car was awful.

This was the 70s. The automotive industry had made leaps and bounds in the over 50-years since the introduction of the car. Unfortunately, England missed the memo.

The results of having three wheels (one in the front two in the back) was that if the vehicle needed to turn, it would flip. Leave it to the ingenuity of coal miners to figure out how to reduce this from happening.

They simply stuck a bag of cement in the passenger side to distribute the weight more evenly. Still, this only reduced the issue, not stopped it.

Wheelies Were a Big Problem

Also, someone at Reliant had the idea to make the car even more powerful. With little wind resistance due to the design of the car, there wasn’t much in the way of keeping the front of the car down. With an extra boost of juice, the lightweight front end can pop a wheely and point skyward. Now, that seems fun, but when you’re on a busy England road, that only spells trouble.