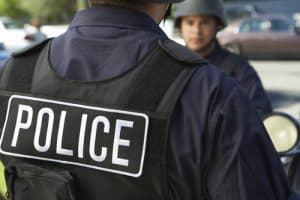 LYNN, Massachusetts — A man accused of impersonating an officer during a robbery led officers on a chase through Lynn early Saturday, police said.

Around 2:46 a.m. on Saturday, police received a report of a robbery on Iona Terrace where the victim said the suspect identified himself as a police officer and flashed a badge. The man grabbed the victim’s wallet and ran from the area, police said.

The victim was able to give police an information about the man and his vehicle, which police later spotted on Broad Street.

When officers tried to approach the vehicle, they said the driver took off.

The suspect, later identified as Christian Alvarez, 33, of Lynn, hit a parked car on Union St., where police said they tried to stop him.

“Alvarez backed into a marked police cruiser and then eventually fled the area,” police officials wrote. “Alvarez then crashed into a tree on Silsbee Street and fled the vehicle on foot.”

Officers chased Alvarez and caught him along Union Street, police said. He was injured in the crashes and was taken to Massachusetts General Hospital for treatment.

While investigating the case, police said they received two additional reports of robberies with a similar suspect and vehicle description. In those cases, the victims reported being stopped by a vehicle with a flashing white light, similar to one police said they found in Alvarez’s car.

Detectives said that they are investigating whether he can be linked to similar cases in other communities or not.

“Police believe that Alvarez may have been targeting Hispanic victims, who may be less likely to report the incidents to police,” officials wrote. “Police are encouraging any victims to come forward and report similar incidents to police.”

Alvarez is scheduled to be arraigned in Lynn District Court on Monday.